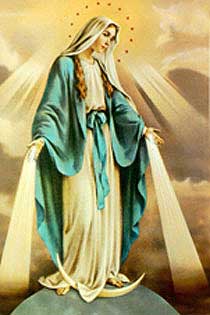 Till recently, three metropolitans of the TOC lived on an estate which had two, or three buildings on it surrounded by a high fence. One of the houses served housekeeping needs, including the kitchen, the other was the refactory and church. The bishops and priests did not venture out of the estate for tons of years, but when there was a need for going out, they usually put on a black shawl and woman's skirt, so as not to attract the attention of a chance passer-by.

The Metropolitan Gennady, who died several years ago, had been ordained bishop by Archbishop Seraphim. He was raised to the rank of Metropolitan during Christmas services in the underground vaults of Tbilisi prison whose chief warden, being a believer, did something that was unimaginable in those days of totalitarianism: on Christmas Eve he summoned all the prisoner bishops of the Georgian Orthodox Church and also several bishops of the True Orthodox Church and told them confidentially that it was possible to arrange Christmas services.

The bishops were given vestments in keeping with their office since it turned out that in the prison underground there was a little church that had remained from previous times. A feastday Liturgy was performed during which the then head of the Georgian Orthodox Church, Metropolitan Malkhaz said to Gennady, "We are doomed to rot here, they will not let us out of here alive. But you are an ordinary priest, they will let you out. You shall be a Metropolitan". Thus Gennady was ordained Metropolitan by twenty Georgian and four TOC prelates.

The Reverend Gennady was a great ascetic. He roamed about Russia, never living long in one place and founded twelve secret monastic settlements and consecrated more than 500 monks.

The last few years of their lives the Metropolitans Gennady, Feodosius and Grigory, who made up the secret Council of one of the branches of the True Orthodox Church, lived in one house. Their daily schedule was: in the morning — monastic canon, moleben and daily Liturgy in full bishop's raiment. The house had no windows so nobody should know that there was a whole church complete with iconostasis and Holy Gates in the house. It was terribly stuffy on account of that.

After the noonday meal, they rested. In the evening there were the Hours and all-night vigil. Several nuns used to come in the evening for discourse or the three metropolitans received the faithful who came from other towns. They preferred to associate with people of their own circle.

The money of which there was quite a large sum at times (donated by persons who asked to be prayed for) was used to render assistance to wanderers and persons coming from afar. There were the most diverse people in the True Orthodox Church. There were simple folk who worked in the countryside; there was an archbishop who worked as a stoker (naturally, no one suspected he was an archbishop), and there were persons with higher education, some with doctor's degrees.

...Today the True Orthodox Church evokes increasing sympathy since it is justly regarded as a martyr Church that has not stained itself by compromises with its conscience and which has a lighter weight of sin compared to the official church.

...It should be pointed out that for the True Orthodox Church, which was not linked with the outside world either through agreements, covenants or bargains with its conscience, it was easier to carry out the spiritual mission of bringing the good tidings, and of inner prayerful recluseness. A catacomb way of life also contributed to sobermindedness, profound repentance, and inner prayer, while little importance is attached to outer marks of priestly or hierarchie distinctions. However, strength of the spirit and the gifts characteristic of the starsy, epecially the of foresight, is highly valued.

...The True Orthodox Church has preserved the tradition stemming from the Orthodox startsy and practically forgotten the official church, namely, the teaching of the acquisition of the Holy Spirit, of true asceticism — the traditions of the startsy of Mount Athos, Sts. Anthony and Theodosius of the Caves, Sergius of Radonezh, Niel Sorky, Paphnutius of Borovsk, Paisius (Velichkovsky), the Optin startsy and Seraphim of Sarov. The clandestine way of life dictated aspirations little connected with this world.

The highest standards among monks is their progress up the ladder of perfection (the degree of their fulfilment of the commandments of grace). The mention of monks is not accidental, they make up the greater part of the truly Orthodox believers, they are wanderers who have abandoned worldly life (since constant persecution has driven them to wandering about the country).

The True Orthodox Church was most cruelly harassed. Believers lived in constant fear of raids, investigations and the like. The police were always after them and only through the grace of God were they able to persevere in the unequal struggle and not falter in spirit.

...To this day the layman finds it hard to understand why young men turn to religion and join the monkhood. What is it that attracts them in the religious way of life? In the TOC the most important thing is prayer and bows. ...The Psalter is read joyously, from the heart. The TOC also attaches great importance to confession. ...There had been ex-actors and scientists from large cities among the ascetics of the TOC. They were tempted by promises of a "sweet life" but they preferred the grace of God to poverty of the spirit. The blessed pilgrims are the nucleus of the True Orthodox Church.

The communities of the true Orthodox are distinguished for special warmth and simplicity of relations between the members, quite in the spirit of early Christianity. Following the example of the Christians of the early centuries, the True Orthodox arrange a common meal after church services. They attach special significance to obedience which is considered the most important yardstick of spiritual perfection".